Hubby and I crave for spicy Korean food all the time recently, and so we dragged ourselves all the way up to Ikebukuro to Seiko-en Yakiniku, which totally hit the spot. And no, we didn't just blindfold ourselves and picked this place out of an advertisement. It was introduced to us by hubby's advisor, K. sensei from his university. She speaks Korean and has lived and taught in Korea before, and when she said this place was good, we believed her. Actually, it was so freakin' fantastic we came back, despite the 1-hour train ride from Yokohama.

Check out their website, it even has an English version ^.^ 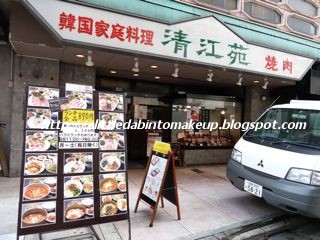 We actually came for lunch time, since K. sensei says they have really awesome lunch deals. Indeed, it was a crazy deal for the American food portion, twice as much as we get else where for about half the price. For the amount of food we had, which we couldn't finish and had to pack up the rest to go, hubby and I paid 1,800yen for the both of us. Why aren't there more restaurants like this near us? T.T

All lunch portions came with a salad and a side of kimchi. 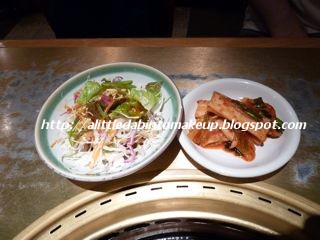 I ordered a kimchi jjigae (kimchi stew) lunch set, and when it came out, my jaw literally dropped. It was a 2-people portion with the stew filling a huge ramen bowl! Even the rice bowl that came with it was just a tad smaller. Did they seriously expect one person to eat all that?!? O.o 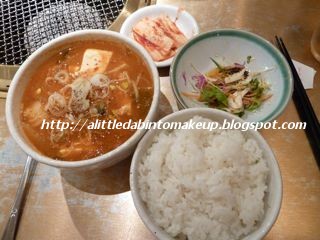 Hubby ordered a bibimbap lunch set, and his was even more shocking! Not only the bibimbap bowl was humongous, it also came with a kimchi soup the size of my rice bowl! After the waiter left, hubby and I looked at each other and agreed 1 lunch set would have been more than enough for the 2 of us. 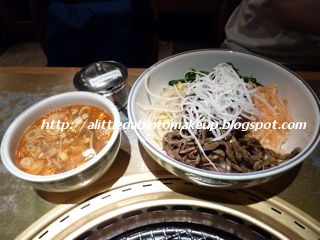 My stew had an egg in it, which I dug up and ate first since we were planning to take the rest home and having an egg swimming around in takeouts wouldn't be a very good idea, you know, for food safety's sake. 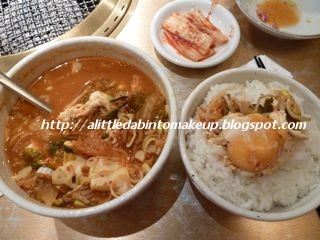 Oh and by the way, their kimchi is made in-house, and it kicks ass. If you are ever around Ikebukuro, do give this place a try.
Posted by D. at Wednesday, November 16, 2011