Last of the hilarious stickers hubby and I found at Tokyu Hands ^.^

The Japanese says, "Shimura, behind you!" This is a quirky tribute to an old game show in which the title character, Shimura, is standing on stage facing the audience. He knows someone will sneak up to scare the living daylights out of him but he doesn't know when so it's up to the audience to shout this phrase out loud to warn him. 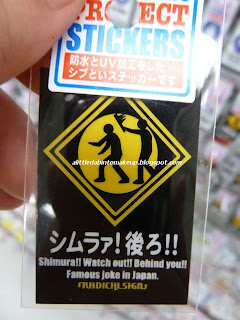 The Japanese actually says, "I am otaku. So what?" Also, his shirt says "moe," a slang term that can be loosely translated as "budding" as it describe the generally pre-pubescent looking (mostly female) characters in animes, mangas, or games. Now, I know I have thrown around the term "otaku" a few times in joking reference to my sister and her hobby. But be rest assured I'm fully informed that the term "otaku" actually has a negative, creepy, perverted, condescending if not derisive connotation in Japan. Most of the time, the term "otaku" is no more complimentary in Japan than the term "geek" or "jock" in the states. Of course my sister and I (and I suspect many anime/manga/gaming fans outside of Japan too) don't necessarily see the term "otaku" in a negative light. So if you're going to use the word, just be aware you may raise an eyebrow or two. 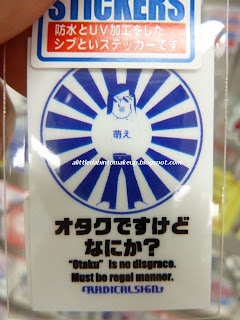 The Japanese says, "Some love, please." 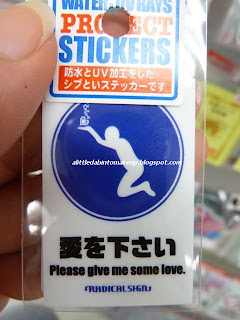 The Japanese says, "Don't cast off your femininity!" Yes, the picture is kind of funny, but if you really think about it, it's plain sexist and offensive. Ha... 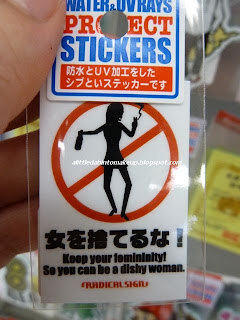 So that's all, folks! Here's the parting memo to Only in Japan... Tokyu Hands series. This sticker is commonly seen inside elevator doors, and in my opinion it's demonstrative of the cute-funny cartoon fixture in Japanese daily life. Almost everything in Japan has cartoon on it, be it a sign indoor or outdoor, the packaging of anything at all, or a logo/mascot of a brand. 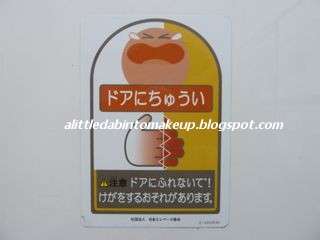 Even a simple package of mushroom has cartoon on it! 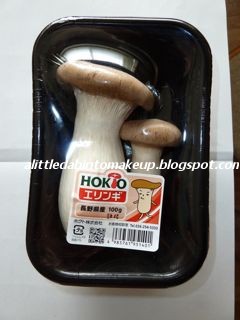 I think the thing is that there's a difference between being a anime/manga/gaming fan and being an otaku.
I mean, I play Pokémon and I read manga occasionally (not much into anime), but the "normal" amount. (Of course, to people in Europe or the US, that alone may seem very strange. And yes, I am a geek - I was in choir, too. (I look like a prep, though. xD))

An otaku is someone who's WAY too much into manga/anime/games, to an amount where their social life suffers or they spent too much money etc. etc. Of course, you might say, spending too much money on clothes or accessories like some Japanese girls do isn't very good either, but I think otaku have that anti-social stigma, like "one step more and you're a hikikomori".

I think the whole otaku/fandom thing is entirely subjective, including what tantamount to being a fan and how much is considered way too much.

Does a "normal" amount of gaming, reading manga, and watching anime constitute a fan, or just a person with gaming, manga, and anime hobbies?

What is considered a "normal" social life versus a suffering social life? What about people who are naturally introverts, on top of having a gaming, manga, and anime hobbies?

Does an otaku isolate his/herself from other otakus? Or is it as pop culture portrayed, and they have their own "networks," forums, and conventions where they share their "enthusiasm" among those who "understands"?

The "normal" amount may differ by definition, but I guess you can say that once your work performance suffers or you start losing contact to others (like your family) or you cannot talk about anything else, the amount isn't healthy.
Now I'm not an introvert per se, but I like spending time alone and totally don't mind hanging out by myself. I also enjoy the occasional manga and I have to admit, I'm pretty much into Pokémon. I also like a lot of other things, though, which is probably what sets the "normal" fan or casual fan apart from the otaku.

Of course it is subjective to a certain amount, but I've always fel that the way Japanese people use the term otaku differs from the way western people use it. The Japanese definitely use it for people who have an unhealthy infatuation/obsession with stuff - which makes sense as everyone and their mother is reading manga or watching anime, playing games etc., just not to the extent otaku do.

I completely agree otaku has a negative meaning in Japan.

Outside of Japan though, I don't really know, but I would guess not always, which is why I think most folks use this term jokingly, whether or not they realize its negative connotation in Japan.

I get the feeling that outside of Japan, liking manga etc. even just a little is considered very weird by many people.
I studied Japanese at university and it really has the otaku stigma, even though I studied really hard and specialised on literature.
(Then again, there are students who really only care for anime - those usually fail the language exams really quickly, though.)

Really? Manga and anime is all the rage in the US ^.^ it's totally trendy, and most young people know of it, thanks to Pokemon, etc. There's a cartoon channel on cable TV that shows tons of anime, even Shinchan, only dubbed in English, of course xD

Same in Germany, but still. It's pretty much frowned upon by adults and "cool" kids (who we all know are not very cool anymore once they leave high school), so... It definitely isn't a very good motivation to study Japanese, at least not if you think studying Japanese means just watching anime all day.

Wow, that's interesting, because manga and anime are so popular in the US these days even colleges offer seminars on them! Believe it or not, there are people writing master thesis and PhD dissertations on them, much like there are people who study pop culture in various countries. After all, manga and anime is a part of Japanese pop culture, so why not? ^.^ They used to be frown upon as frivolous, but now they're widely accepted as legitimate social topics, thanks to the concept of "soft power."

I think many Japanese language teachers share your sentiment because they have encounters so many students who only wanted to study Japanese because of manga and anime instead of being genuinely interested in Japan for its language or culture. And of course, the same students would experience major culture shock to learn the "real" Japan is nothing like how it's depicted in the numerous and popular manga/anime/dramas/movies!

I do believe that. I took a seminar on manga myself and some people do research their influence etc. Depending on the point of view, those are still seen as inferior to "real" literature by some, though. But you're right, there's been a real breakthrough - not for the wide public, though. I can research and analyse manga/anime etc., but I still get weird looks when I say I love Japanese music. Most people in Germany tend to think of only visual kei or maybe some of bands like AKB48 when they hear Japanese music, which is really not what I'm into.

These otaku people here in Germany - people you claim they're into Japan when they only like anime etc. and don't even try to gain a cultural understanding - are ruining a lot for the "serious" Japan lover.
When I studied in Tokyo, a friend of mine was in Kyoto at the same time and she had the worst experience: A couple of her friends from Germany came to visit and seriously walked around town in cosplay outfits because "that's what Japanese people do". I can't facepalm enough here. (I think my friend just pretended she didn't know them.) For many of those people, Japan is not Japan, but some fantasy country where they can live without any rules. They think that everything is like anime depicts it to be and completely fail to understand that anime are fictional and that the actual state Japan has a lot of rules and codes to be protected, probably even more so than Germany has. I honestly feel embarrassed by their behaviour.

LOL now you're getting into the territory of typical stereotypes of other countries, which is present in pretty much any country ^.^

There's no need for you to facepalm or feel embarrassed. What your countrymen do does not reflect upon you as an individual in anyway just because you share the same nationality. Those who think otherwise are narrow minded and should be ignored :) Trust me, the international consensus is that the Americans take the cake when it comes to the obnoxious tourist title ^.^ I learned to just giggle it off, and perhaps at those silly folks who contribute to our great name xD

Besides, I'm quite sure I'm guilty of the same crimes at one point or another (may be not the cosplay parade though -.-'). When you're in a foreign country, it's inevitable that you make an ass of yourself no matter how respectful of the culture and the people you try to be.