More funny stickers hubby and I spotted at Tokyu Hands ^.^

The Japanese says, "Cheating is prohibited." The English has an added clause, "unless you want to breakup with your girlfriend." Not sure where they got this because the Japanese text is short and simple. Also, the English text introduces the moral dilemma of whether cheating is okay or acceptable when you want a breakup. Hmm... 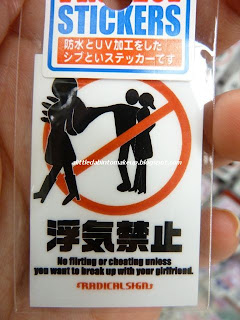 A decent translation, only the Japanese text isn't a somewhat begrudging command in the form of an annoyed question. Rather, it's an outright aggressive and extremely rude command. I mentioned before one can be vulgar and profane in Japanese without being literally vulgar and profane, this is a good example. To say this to a stranger on the street would be an equivalent of, "Shut the fuck up for a bit!" or if you're yelling at a friend or a younger sibling, it would be, "Shut up for a bit, you [insert name-calling here]!" 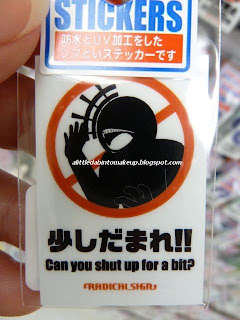 The Japanese says, "Princess first." LOL I should totally get this one and stick it on my car just to see fellow drivers' reaction ^.^ 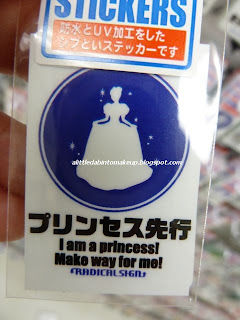 The Japanese says, "I'm secretly aiming for world domination." For your inner Brain. 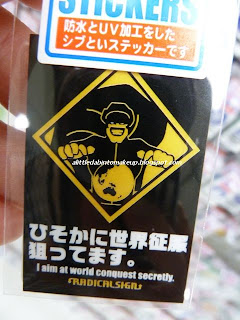 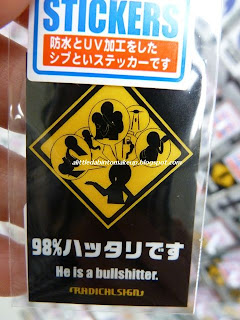 The Japanese says, "Beware of the offensive stench." Love that gas mask! Bwahaha!!! And what's with the X at the front?!? 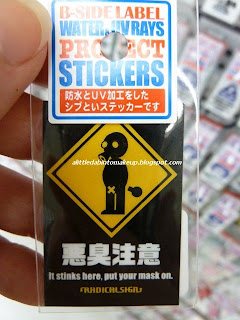