These Lancome Color Design Palettes came out in spring 2011 (I think...), but at the time I wasn't at all interested. To be honest I was never really into Lancome eye shadows to begin with. Having played around with several GWP palettes in the past, even though the colors are pretty I found their texture and finish consistently dull and lacking. Not to mention these Color Design quints are expensive at $49 a piece. A bit much for blah, no? 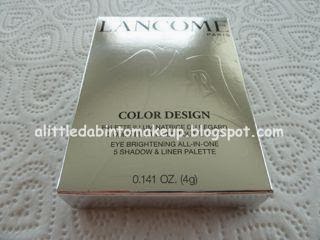 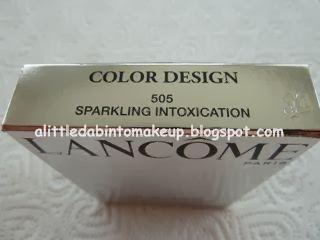 Fast forward to this summer, and Lancome launched an assault campaign in collaboration with Alber Elbaz, forcing blinders on my peripheral vision with eye-poking, attention-grabbing emails every time I checked - thou shalt lookest (or at least googlest)!!! So I did. Out of all the color combos available, I found 505 Sparkling Intoxication most interesting, thanks to the review from Rouge Deluxe. So I picked it up to try along with 100 Taupe Craze and 503 Mint Jolie housed in the limited edition compacts by Alber Elbaz. I will review those 2 in a separate post. 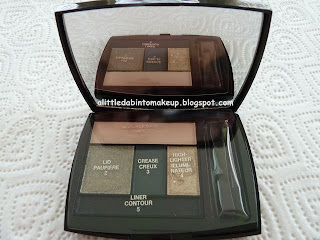 After using all 3 palettes, my opinion of Lancome eye shadows has not changed much. Sure, the overall quality of the Color Design palettes is decent, especially in terms of pigmentation and variety of fun and exciting color combinations. However, textures and finishes still disappoint, not to mention they often don't work well together, even those in the same palette. 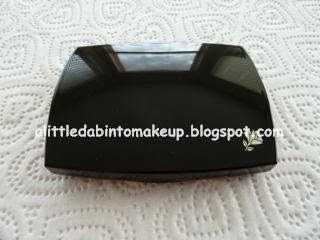 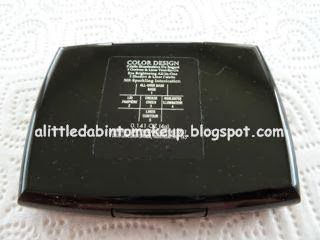 - 505 Sparkling Intoxication: a silvery champagne and inky blue combo with a kick-ass lid shade and pretty top wash. But other than these 2 colors, I don't love this palette and I think it needs a lot of work in terms of texture and finish. 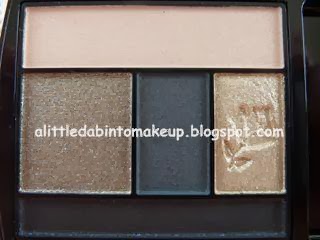 - Base: satin, very sheer. An ecru that in theory should work well but doesn't. The satin actually dulls the shimmers from the lid shade instead of complimenting it. And yes, I use it as instructed, sweeping all over lid, over the brow bones. It also doesn't do much for highlighting the inner corners or the lower lash line either because it's just too sheer. The swatch below was done heavily for this particular shade. The only positive thing I have to say about this color is that it's the softest and smoothest one in the whole palette.
- Lid: metallic, low intensity. A metallic, super sparkly, and translucent green-tinted silver with a glistening wet sheen. Quite a complex and multi-dimensional color. I do like it very much as a lid shade. In fact, I would recommend wearing this color alone with just liners. That said, the amount of shimmers in this shade makes it dry and somewhat gritty.
- Medium crease: matte base with floating shimmers, high intensity. A matte deep blue green with micro flecks of bluish green shimmers that don't show at all. This shade is smooth but is somewhat chalky, and I so wish it was not matte based. As pigmented as it is, it appears rather flat and muddy on me as all matte eye shadows do, even on the back of my hand. That's why I love sparklies and metallics! Also, I think the touch of green in this shade clashes a bit with the inky blue liner shade below. They should have left it more blue and less green.
- Top wash: high shimmer, very sheer. A translucent sparkling champagne that's super dry and gritty. I still like it though, because I love me some sparklies ^.^
- Liner: matte base with floating shimmers, high intensity. A matte inky blue with scattered royal blue shimmers that, again, don't really show, which is a shame. I want the royal blue shimmers to glisten more, but in a matte base they just get buried in the mud. Also, this shade is dry, chalky, and somewhat gritty. Urgh. 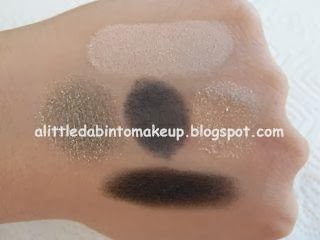