Hubby was craving Tex-Mex, but after our last failed attempt at getting something reminiscent of Mexican food, I thought I might as well just throw something together and hope it works. It sort of did, and we didn't have to pay an arm and a leg for it ^.^ 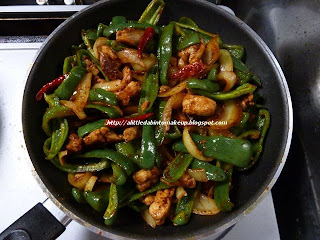 Here's to the most half-assed thrown together Chicken Fajita ever (mostly due to a lack of ingredients, only a small portion is my laziness), and it wasn't that bad :P

Ingredients:
- Chicken, sliced into strips. I prefer dark meat, but white will work.
- Onions, 1 large or 2 mediums, sliced. I prefer purple onions because they're sweeter, but they're really quite expensive here, so I just used white.
- Bell peppers, preferably 1 red and 1 green, but the red/orange/yellow peppers here costs a fortune (actually it's about $3.50 for 1 tiny one smaller than my fist), but any color will do.
- Optional: dry whole chili peppers
- Optional: other veggies.
Seasonings:
- Salt, 1/2 teaspoon.
- Chili powder, sprinkle on generously.
- Paprika, sprinkle on generously. I didn't have paprika, so I used Korean gochugaru, and it worked just fine in addition to adding some "flare" to my chicken fajita, which didn't hurt (me, that is).
- Black pepper, again, generous sprinkles.
Steps:
- Coat pan with olive oil, let heat well.
- Brown the chicken just by itself, and only after the chicken is golden, add in all seasonings and mix to coat well.
- Let the chicken "dry" fry for 5 minutes, then add the onions. If you use dry whole chili peppers, you can add them here too.
- Let the onions cook for another 5 minutes, add the bell peppers.
- Serve when the bell peppers are soften and the chicken is seared and fragrant.
The usual strappings of guacamoles and salsa are hard to come by in Japan, so hubby and I made do with flour tortillas, chopped lettuce, chopped tomatoes, chopped avocados, and Chipotle Tabasco sauce instead. Yep, they don't have salsa, but Tabasco sauces are aplenty. That's Japan for you.
Posted by D. at Thursday, March 08, 2012